The ICS Night by the Indian Cultural Society returned for its annual performance as they brought Victorians right into the middle of a crime scene in a stunning performance Thedal that wasn’t simply just a criminal comedy or a musical, but both! ICS Night has been a classically popular event held during the concert season in VJC, attracting not just Victorians, but also students from other schools, for its bombastic, vibrant, and Bollywood-esque play with aesthetic, power-packed dance pieces. Thedal 2018 was, of course, no exception, successfully getting a full-house audience just like the previous ICS Night performances. The process of getting to the end goal, however, was not as glamorous as the performance itself, with nearly 6 months of preparation required to write the script, cast the actors, prepare the dances and the acoustic arrangements and create props. It was extremely tiring and draining for all the members of the CCA, but a rewarding experience nonetheless.

To gain greater insight into the hard work put in behind the scenes, we interviewed some ICS members regarding the preparation process. The preparation for the momentous event began during the December holidays itself. Scriptwriters met up to brainstorm, map and finally execute the script. The executive committee members got busy and delved into planning for ICS Night. As the plot materialised, it became clear that this time ICS Night would be an entirely novel experience for everyone as the scriptwriters chose to deviate from the usual love triangle (or maybe love heptagon). The songs were chosen after careful research to ensure that the dances would provide maximum entertainment. Soon after, the J1s joined and were allocated their dance items and choreographers. Auditions were held and cast roles were cemented. It was time for the entire CCA to get into the grind.

The March holidays were the first point of contact for the seniors to meet their juniors and get to work on their dances. The three days were exhausting and yet memorable. Soon enough the Saturday practices started. They were gruelling as many people had back-to-back dance practices to ensure everything was going well in the days leading up to ICS Night. The trailer was filmed in collaboration with StudioV. All that was left was the announcement to the entire school. With that came the publicity dance. This was an energetic dance to the song “Let’s Nacho” which certainly hyped up the school. The executive committee were on track to accomplish what they had to set out to do: put on a great show!

Meanwhile, the production crew was busy buying materials to make props, running around back and forth during the Saturday practices. They were in charge of buying or borrowing props or even making their own props, memorising the sequence of moving props into and out of the stage, and making sure that the production ran smoothly. The days leading up to the performance was extremely tough for the production crew, as they ran into many problems, such as props starting to break and fall off. However, eventually all problems were solved, and they got together to put on a great show! 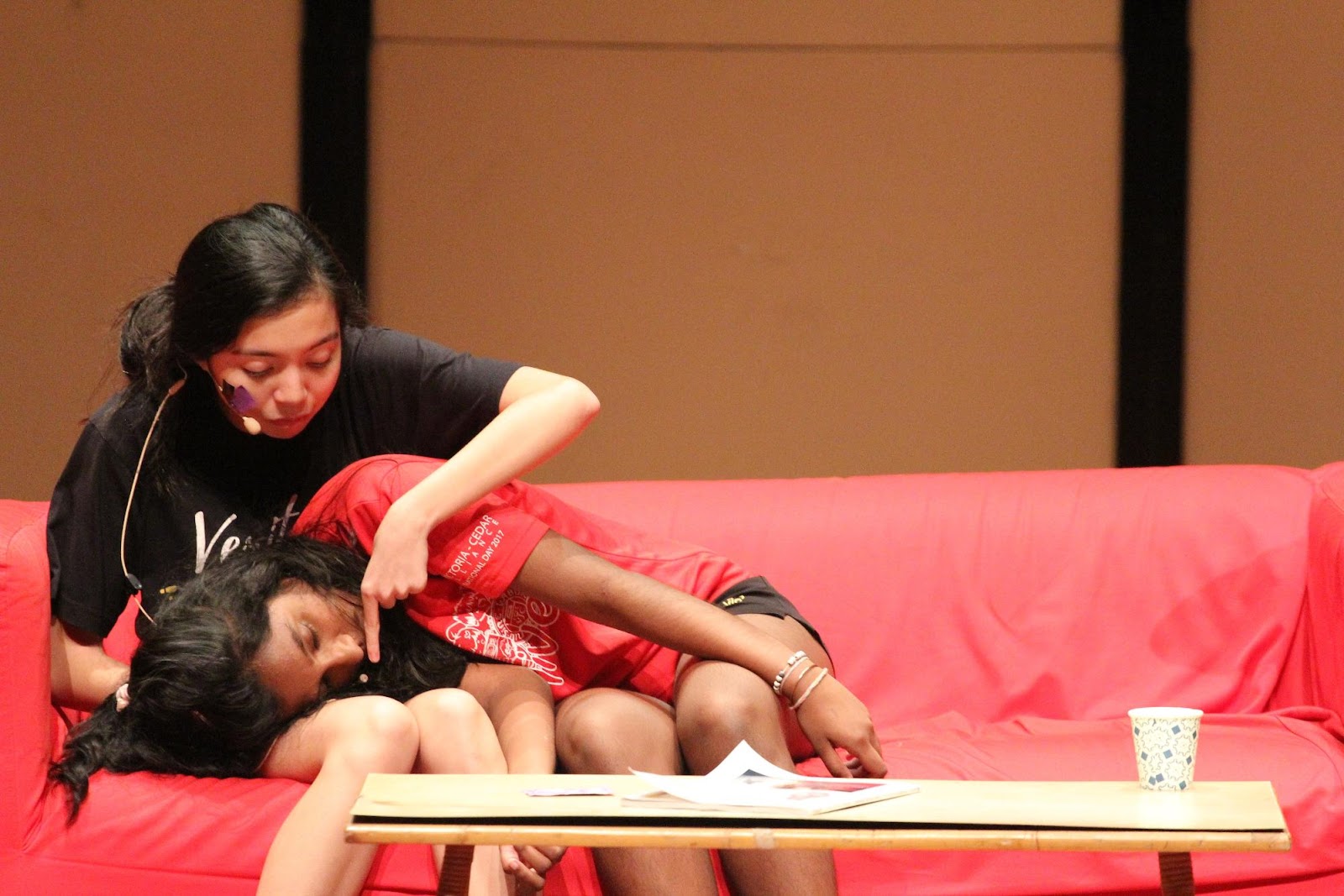 The theme of ICS night 2018 was Thedal, meaning ‘The Hunt’. This was an apt name for a performance not only full of drama and humour, but also lined with suspense and mystery, as the plot centred around the disappearance of the famous dancer, Anjali. The story certainly kept the audience on the edge of their seats, as many plot twists and startling truths were revealed along the way. While the detectives, Pradeep and Jaspreet investigated thoroughly and unmasked every layer and clue to cracking the case, many in the audience were making their own guesses on who the kidnapper was — the boyfriend (…or should we say fiance?), the best friend or the boyfriend’s best friend? As the story progressed, we delved deeper into the friendship and history between Anjali and the people around her, and every moment of love, hilarity and camaraderie between best friends.

While the connections were slowly drawn, the kidnapper also grew bolder in his threats towards Anjali’s life. The kidnapper’s motives were explored and the detectives get closer and closer to nabbing the culprit and saving Anjali. The climax of the story saw the detectives and kidnapper locked in a tense confrontation. It was here that the biggest revelation of the night dropped — the identity of the kidnapper. As many surprised gasps and exclamations filled the performance theatre, the plot wrapped itself up and the last jigsaw piece fit into the complex puzzle. Ultimately, the story ended with a touching message: to treasure and cherish your friends, family, and all the people you love. Arguably one of the highlights of ICS night were the vibrant dance scenes. These dance scenes were weaved seamlessly throughout the gripping plot, ensuring that the eyes of the audience were permanently glued to the stage. Interestingly, there were a myriad of dance styles, a thrilling mix of both modern bollywood dances and traditional dance forms.

For the modern dances, they were punctuated with high energy and excitingly choreographed stunts. The blasting Bollywood music definitely hyped up the crowd as dancers jumped around the stage executing their moves with grace and enthusiasm. The crowd was eating it up – shouts of the dancers’ names constantly rang throughout the theatre amidst the screams and cheering. It was a sight to behold. However, the performance was not only limited to modern dances. A key component of the dance scenes were also traditional dances. The dancers wore traditional Indian clothing- a marked difference from the T-shirts and jeans worn in the modern dances. The dazzling array of colours that flooded the stage was a striking image to behold. The traditional dances placed a greater focus on moving in unison, working together as one collective group. The celebration and showcase of Indian culture through dance and costume reflected the pride and appreciation that all members had for the culture.

One standout scene in particular had a mix of both traditional and modern dance placed side by side. Sharing the stage, the dancers were easily distinguishable by the clothing they wore. Each group of dances for the different types of dance took turns dancing as the other remained frozen on stage. The juxtaposition of tradition against modernity made for an interesting visual treat, comparing and contrasting the dance forms while emphasising the change in Indian dance over the years. It culminated into a combined dance number, where the traditional and modern dancers grooved to the music together, providing a satisfying ending to that dance sequence. This thought provoking piece truly reflected the mix of tradition and modernity that underscored the entire night. The Indian Cultural Society not only presented us with a vibrant performance, they managed to pay homage to more than one aspect of Indian culture; showing how tradition and modernity were not in opposition, but meld together into a wholesome and unforgettable showcase. 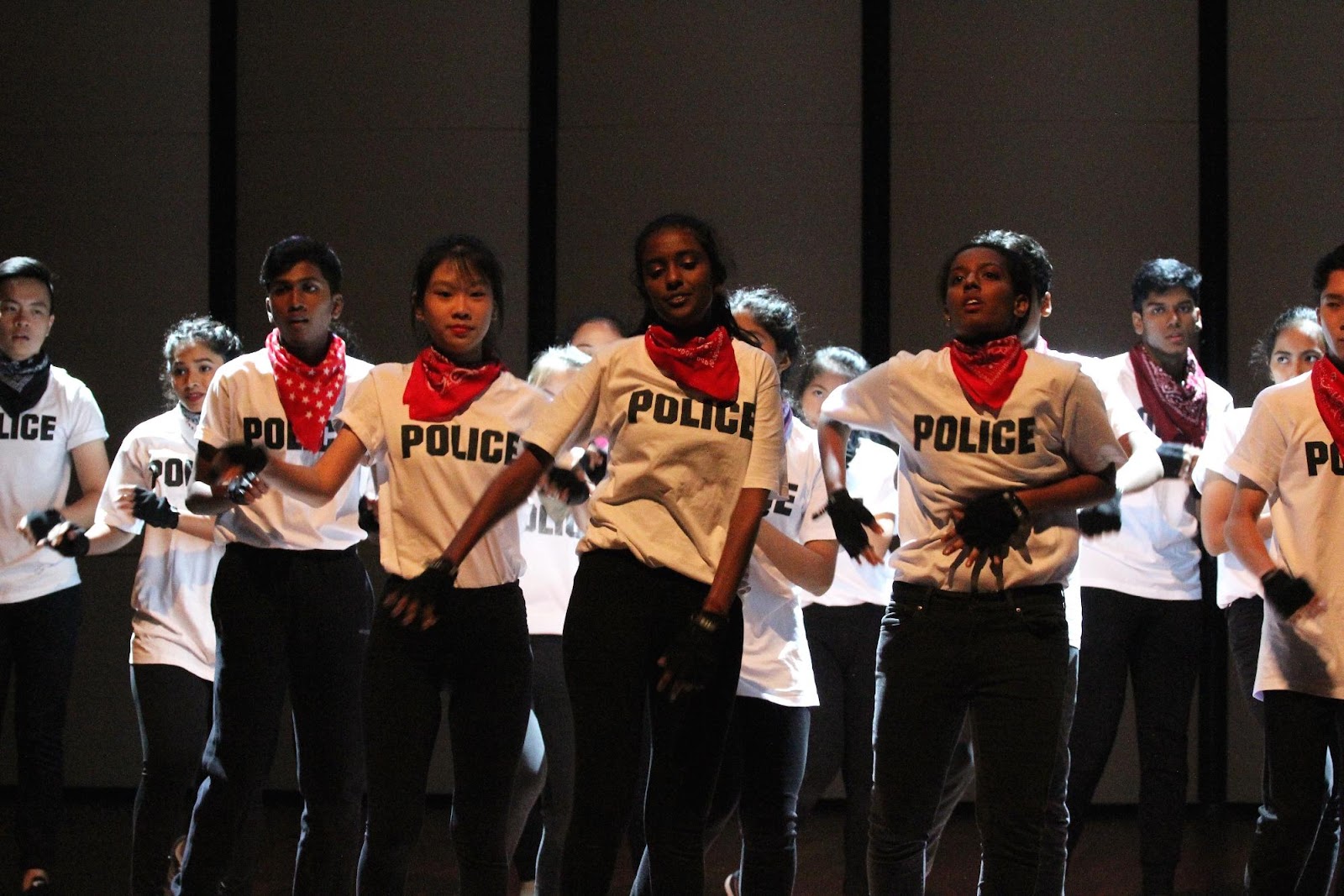 The Victorian Press was able to interview a few ICS members as well as members of the audience.

First up, we talked to Dharshini, a J1 member of ICS from 18A11, before the big show that Friday. An array of emotions could be seen from her face, from excitement, eagerness and also a hint of nervousness. She would be performing classical Indian dances later that night and would also be starring in parts of the skits during the performance. According to her, “ICS night is a very crucial event for all of (the ICS members) to really pull (their) weight and do something as a CCA” as it is their biggest event of the year, with many months of hard work being put into it. She feels that ICS night “isn’t just about the Indian community coming together to present something, but everyone, people from all races and all walks of life, coming together and we put up something beautiful for people to see”. Regarding her role as a classical dancer, Dharshini confidently claims to be proud to be a classical dancer as according to her, not many people know much about Indian classical dance, preferring hip-hop or what is cool in the moment. True to her culture, Dharshini states that classical dance is close to her heart because it belongs to her culture. Ultimately, she would like the audience to appreciate the classical dances and to get to know more about it about this traditional art form.

Next up, we interviewed a member of the audience, Rebecca from 18S37. She was entranced by the stunning performances that were put up by the ICS members, and felt that humour was a major part of the performance, from Pradeep’s jokes to the many other ones that left her laughing. It definitely was “a stress-reliever” and she felt that it was quite ingenious of ICS to showcase the Indian culture through the use of jokes. Furthermore, she felt that the performance was not only educational, but enlightening as well as eye-opening. The performance had made her more culturally aware as she slowly learnt more and more about the Indian culture throughout the performance. Overall, Rebecca felt that ICS night was a major success, and she eagerly looked forward for next year, hoping that it would be just as good as this year’s performance.

From the ferocity of the applause and the booming laughter that echoed throughout the Performance Theatre, it was certainly fair to say that these sentiments are held not only by Rebecca, but also the rest of audience. This would have only been possible had it not been for the blood, sweat and tears put into the Night by members of the Indian Cultural Society. From the highly energetic dances to the greatly comedic performances, we at VPress certainly had a enjoyable time covering ICS Night and we hope you did too.