I snuggled into my seat.
The train begins to gain speed as I stare out of the window into the clear blue sky.
“The ride will take 75 minutes.”
“Alright.”
I fell asleep.

A soft pat on my shoulder, I aroused.
“We are almost there.”
Dazed, I looked out of the window, only to see my reflection
And then not anymore.

I jolt out of my seat
Awestruck and mindblown
“Woah.”
It is beautiful. 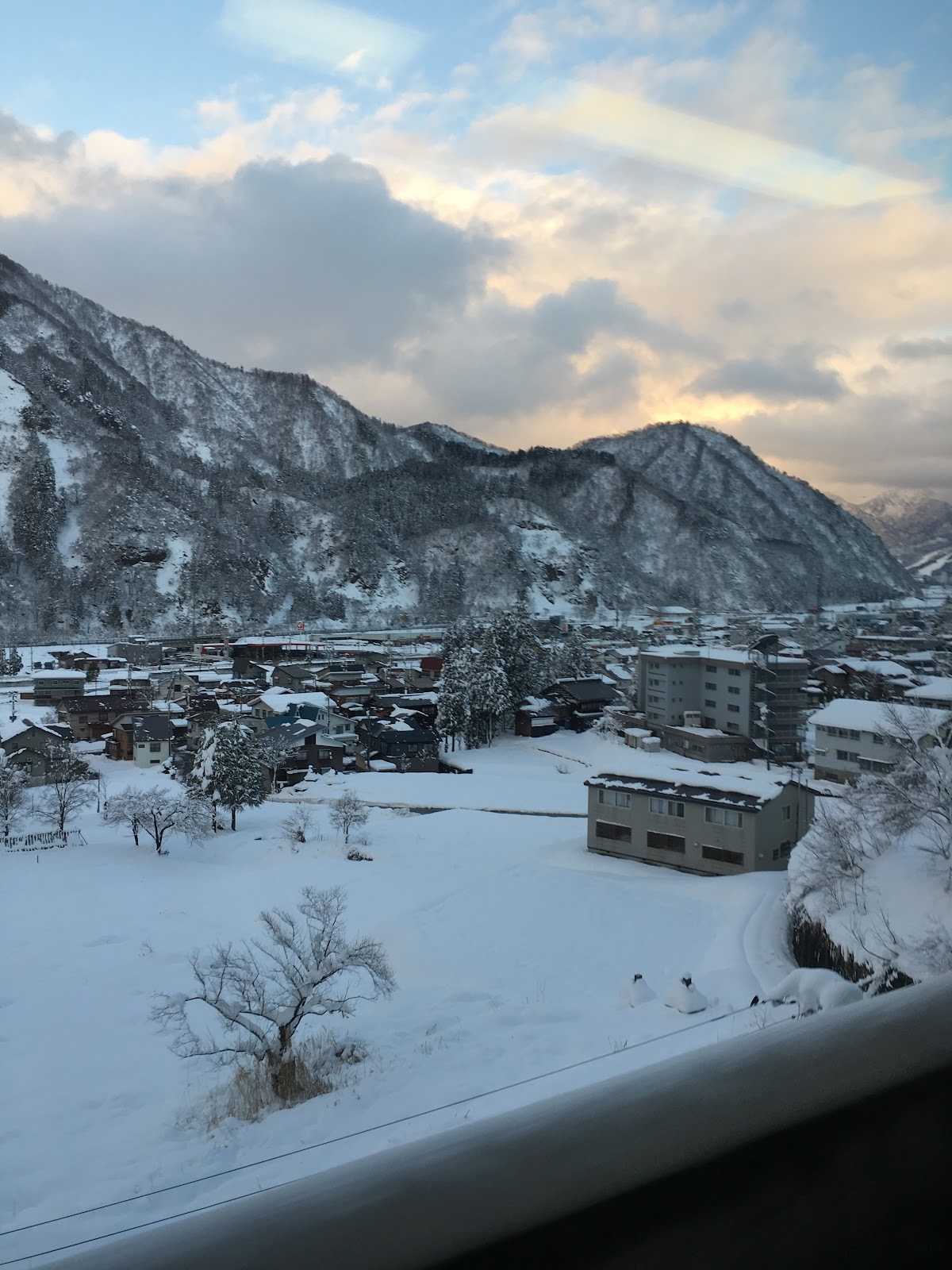 Last year, my family had taken a trip to Japan for our year-end vacation. I was in charge of coming up with the itinerary for our 8-day trip to Japan.

The first two days were to be spent in Yuzawa, a mountainous town about 200 km from Tokyo. Upon arriving in Japan, Tokyo, we wasted no time in heading there, excited for the adventures ahead of us.

Tokyo to Yuzawa is an hour apart if you take the shinkansen (bullet train), which my family chose as our form of transportation. For most of our ride, the train cut through the many neighbourhoods of Tokyo. At some point along our journey, I was even able to catch a glimpse of Mount Fuji. However, feeling fairly tired from the plane ride from Singapore, I finally succumbed to my exhaustion, taking a nap in the comfort and warmth of the heated train cabin.

I woke up a few minutes before we reached our destination. As the train exited the tunnel, my eyes fell upon a landscape swallowed up by white and grey, a stark contrast from the colourful Tokyo city I had been in less than two hours ago. I was abuzz with excitement, eager to venture out of the train into the new surroundings. Eventually, the train came to a halt at the Echigo-Yuzawa Station. With my luggage in my hand, I stepped out onto the platform like a baby taking his first steps, relishing in the sensation of fresh icy air on my cheeks – only to be disrupted by gusts of cold wind blowing into the station moments later, reminding me that I should probably put on my winter coat.

I smiled. This is the start of a new adventure.

I felt like a rat thrown into a maze.

Our surroundings were unfamiliar as the road signs were all in Japanese, which we could not understand. My family had tried to use Google Maps to lead us to our hostel, but to no avail. The fact that I am bad with directions did not help.

As we stood there helpless and shivering in the cold, we were approached by an elderly local man who to our relief, not only gave us the directions, but walked us all the way to the hostel which was two streets away. He did this while wearing only a thin layer of clothes in the chilling winter, whereas we were all wrapped up in multiple layers. I was definitely touched by his hospitality and kindness, how he got out of his way to help us, expecting nothing in return. With a big smile on his face, he bid us goodbye at the hostel, and I found myself wondering how many people had found themselves on the receiving end of this earnest smile. Probably a lot.

In the end, we realised the hostel was only four streets away from the train station – a mere 10-minutes walk. The hostel is called Sansan Backpackers Yuzawa, drawing a sharp contrast with big city hotels with its traditional interior design and Tatami rooms. This was something I had only seen in pictures and through the screen, but had never experienced personally. Getting the chance to experience the traditional Japanese culture first-hand was an eye-opener. The hostel was also extremely cozy and warm, the owner of the hostel especially so – cheerfully sharing with us places to go and eat and treating us like kings and queens!

Even though I had only met two locals here so far, I could already sense their inclusivity and hospitality – genuine and heartwarming on this cold winter day. In retrospect, I wished I could have gotten to know the locals better, and learn more about their lives in this part of the world.

After unloading our belongings and getting situated, we headed out to refuel ourselves, stomach rumbling in the 3-degrees cold. We headed to a nearby family restaurant the hostel owner had recommended, stopping for pictures and playing with snow along the way.

One interesting thing I spotted in Yuzawa was the sprinklers built into the roads. I was particularly intrigued by this odd combination. After doing some research, I found out that they were installed to spray the road with warm groundwater, to prevent snow from building up. How innovative!

It was about 5pm after dinner. With about an hour left before the sky darkened and the temperature dipped, we headed to the minimart located near the train stations to pick up some snacks and supplies, and then calling it a day.

The next day, I woke up fired up and ready to go. It had already started snowing, the streets were covered by sheets of snow. Christmas day and snow? A perfect combination.

Rejuvenated after a long, restful sleep, we carried out our plan of going up the mountains to ski! We set out onto the road at 8am, to a ski rental shop where we rented skiing attire, skis, snow goggles and a few sleighs.

With our equipment all set, we headed up to GALA Yuzawa Ski Resort. (The ski resort is connected directly to the train station, making one-day trips to Yuzawa possible as you can conveniently access the train.) 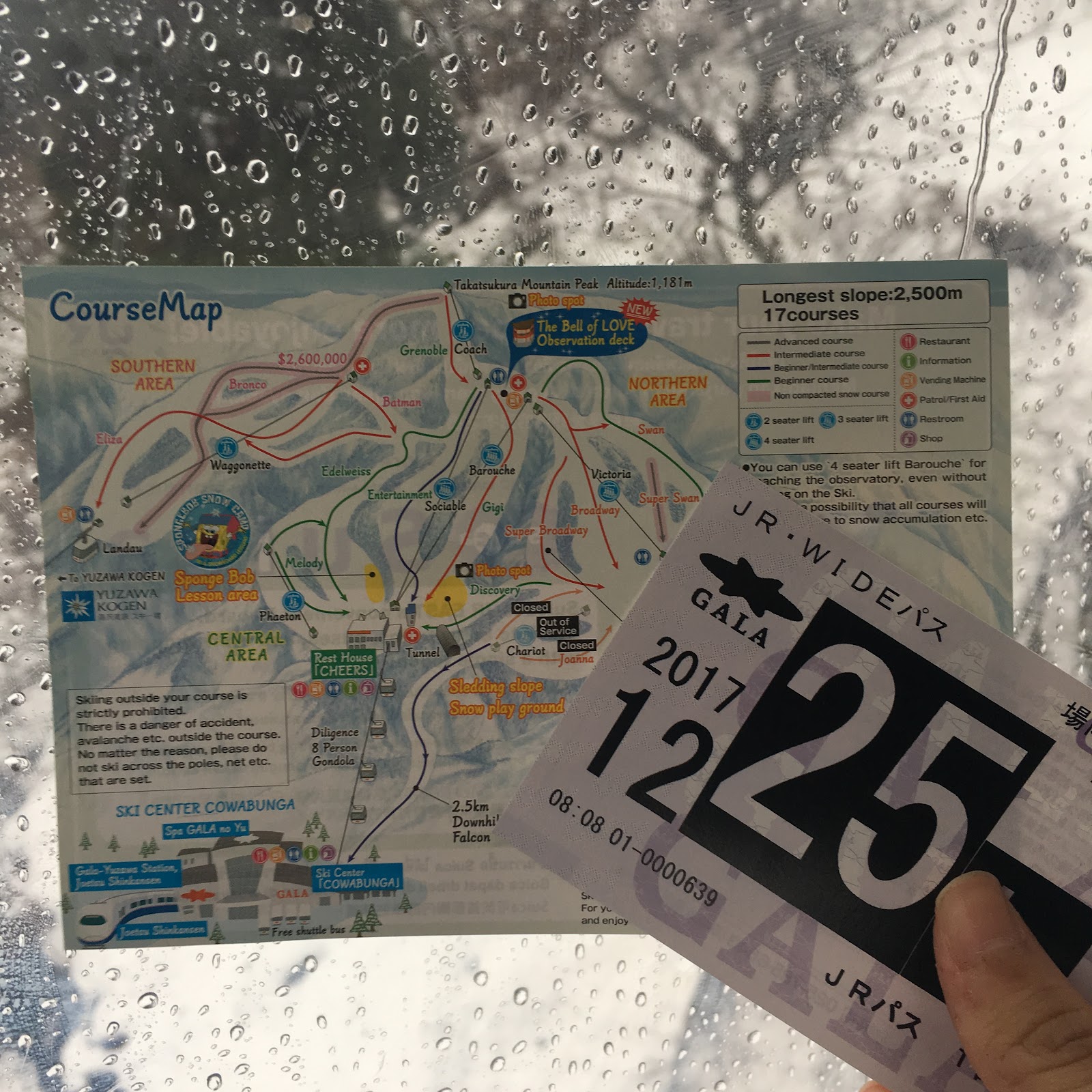 Before going up to the skiing area, we bought our tickets from the counter. Then lugging our ski equipments, we boarded the gondola. After reaching the ski area we headed first to the canteen for some breakfast, anxious and fidgeting in excitement to put on our skis and slide down the ski slopes. With sated stomachs, we then gave ourselves the go ahead to carry out what we came here for. We set up our equipments and headed up the ski lift, ready for the thrilling day ahead. My family had skiing experience, so we were able to go straight ahead. Beginners, however, usually need to take lessons at a fee before they are allowed to ski, so they are recommended to go earlier to ensure they have ample time for lessons. 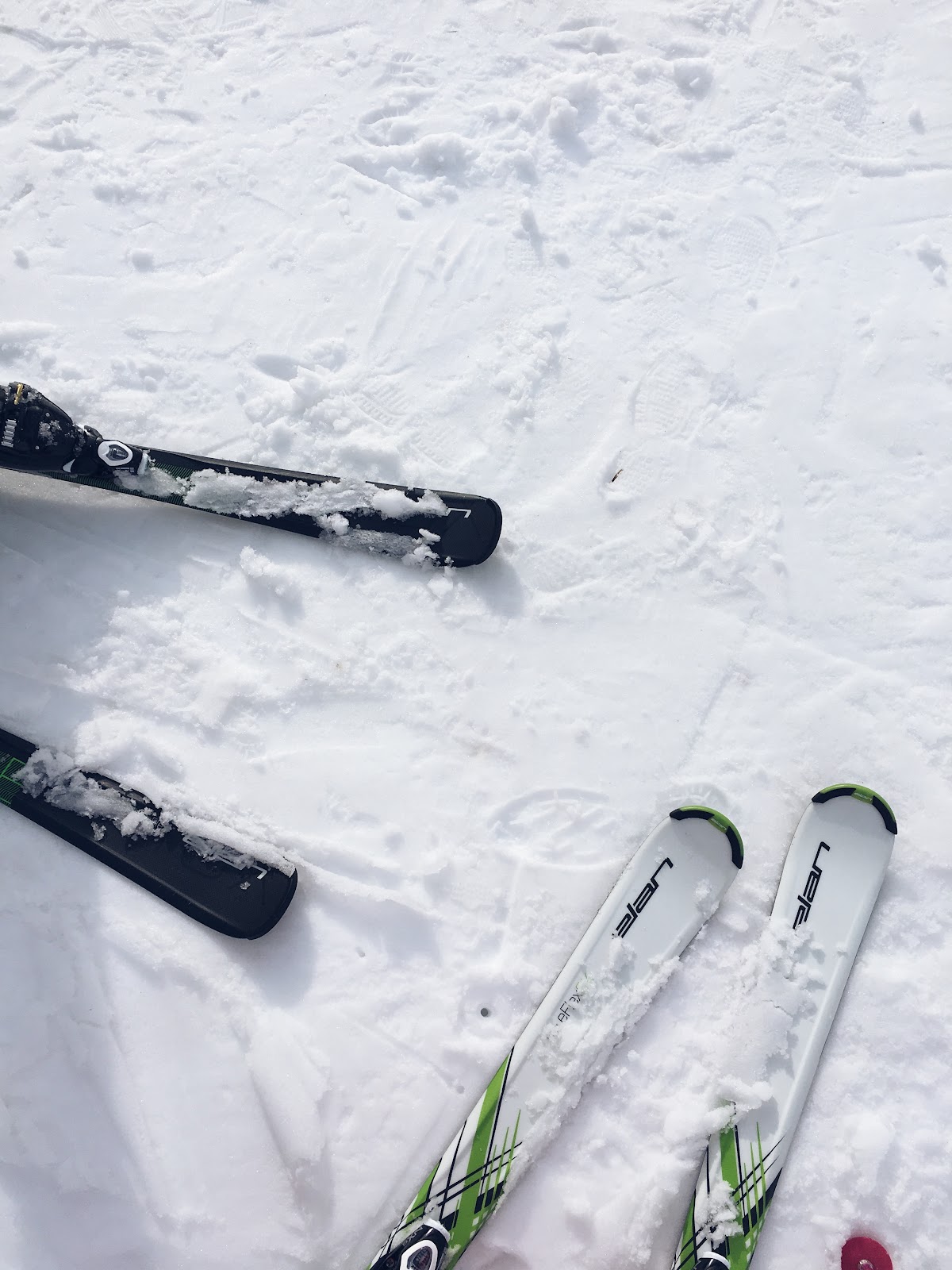 Skiing is one of my favorite recreational activities, which is ironic given the limited number of times I had skied. The buildup of anticipation when riding the ski lift to the moment when the skis finally touch the snow, that first push to get up from the lift to ski down the slope give an indescribable sense of freedom and joy to me. The beauty of the scenery never fails to astound me, helping to clear my mind. It is also a really good form of exercise! After a few rounds up and down the ski course, we headed in for lunch. The canteen offered various kinds of food such as spaghetti and Japanese curry rice. Despite the low temperatures, I was sweating – evidence of how much fun I was having, and the intense workout I had done.

After a hearty lunch, we took out our sleighs and headed to the sleigh area. This activity is suitable for all ages as it is simple and fun at the same time – even my grandparents took part in it! I also built my own snowman; using a snowball maker to make almost perfectly-shaped snowballs was oddly satisfying! 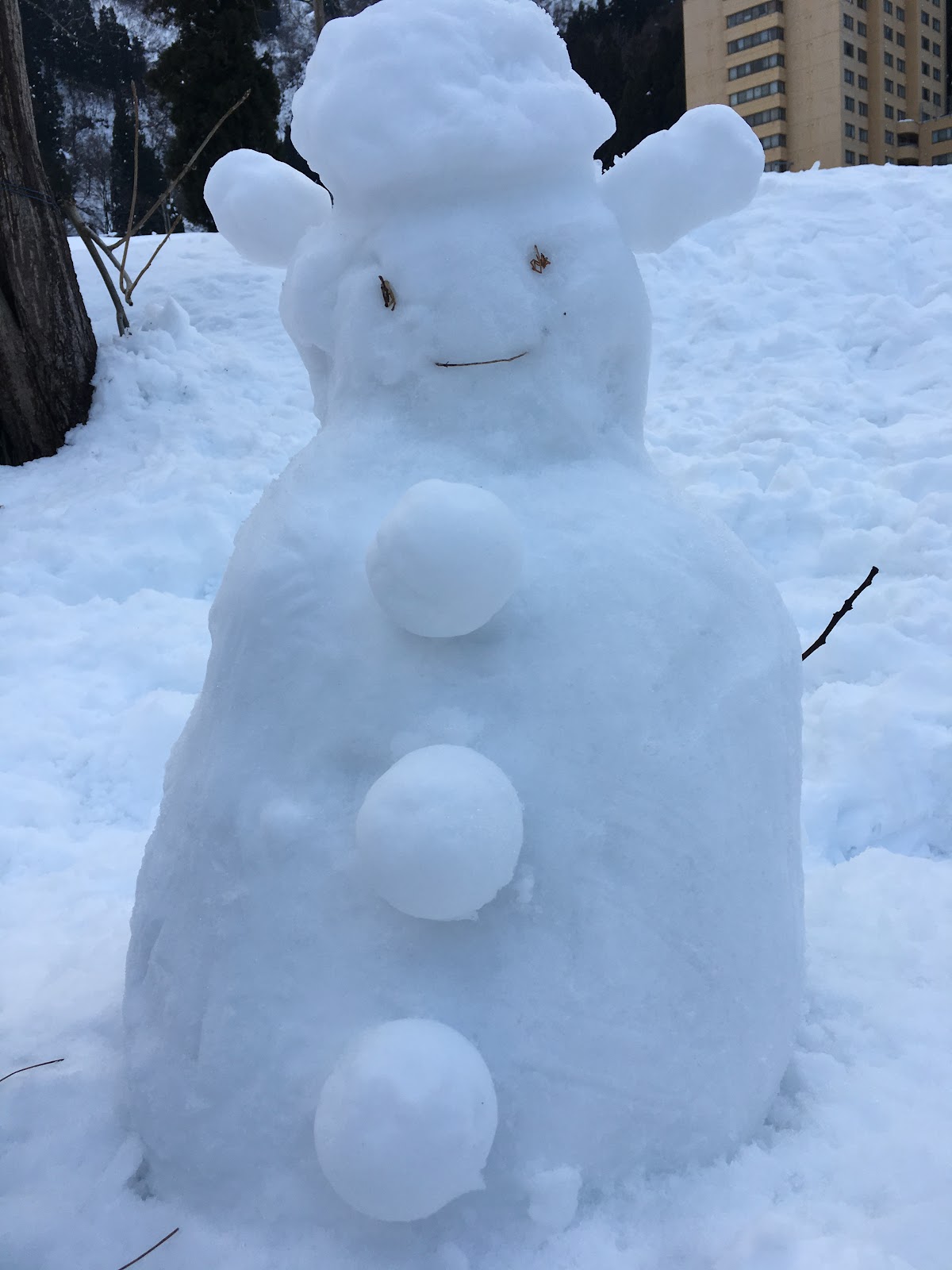 After a long afternoon of outdoor activities, we settled for something more laidback the rest of the day – a trip to the hot springs. This is something Yuzawa is known for, and it is a great place to rest and relax after an action-packed day.

With this, our short stay in Yuzawa has came to an end, and it was nothing short of fantastic. We bid farewell to the beautiful scenery and headed to the train station for a train back to Tokyo, this time with a renewed sense of gratitude and fulfillment. I got to experience the more traditional side of Japan, meet new people and satisfy my craving for adrenaline. The freezing temperatures of Yuzawa also gave me newfound respect for the people who live there – especially the people who work all day, be it running the hostel, working at the ski resort or coaching novice skiers and snowboarders, guiding them tirelessly up and down. These two days of heaven have definitely spoiled me and got me begging for more! I would surely go back if given the chance, and this time, I would arrange for a longer stay and take the opportunity to mingle more with the local community.

What Lies At The End Of The Rainbow

Rare Phenomena and Where to Find Them

Take Me Away: Stockholm