Actors and actresses in strikingly bright dresses, absurd headdresses, and shiny makeup lined the sides of the aisle leading into the Performance Theatre, welcoming their audience while sneaking excited grins to one another. A buzz of excitement filled the air as people milled around the entrance, reading the film posters which had been put up outside the venue and making predictions about what the two plays would be about. The excitement in the air was tinged with a sense of foreboding and controlled anticipation for the Drama Club’s imminent performance.

As the audience fidgeted in their seats, waiting for the first play of the night to start, the lights dimmed and hushed whispers blanketed the room. Suddenly, the stage was illuminated and colourfully dressed actresses flitted into the spotlight. Their dresses fluttered in bright hues of green, blue, and pink, covered in white polka dots that served to overlay them with a playful mood. It was time for Size 00, read as ‘Double Zero’, written by Cheryl Lee. The cast consisted mostly of J2 Drama Club members, save for three J1 members: Shaun, Su, and Juliana. The fifteen minute play was the Club’s Singapore Youth Festival (SYF) piece, and the audience had high expectations for it.

As the actors and actresses danced in synchronous across the stage and executed their roles flawlessly, the initially light-hearted scene unfolded into one of internal conflict and societal expectations, along with other social topics, including body image issues and the industry that thrives on it. On the surface, the merry song and dance reflected a high-spirited group of people, as if completely carefree and worriless. Yet as the play progressed, scenes depicting actresses with varying weights comparing themselves against one another and vying for the ‘ultimate body’ became painful reminders of how the media forces upon us the idea of the ideal body — that few of us actually have — one that looks fit, slim, and able to fit into size double zero clothing. 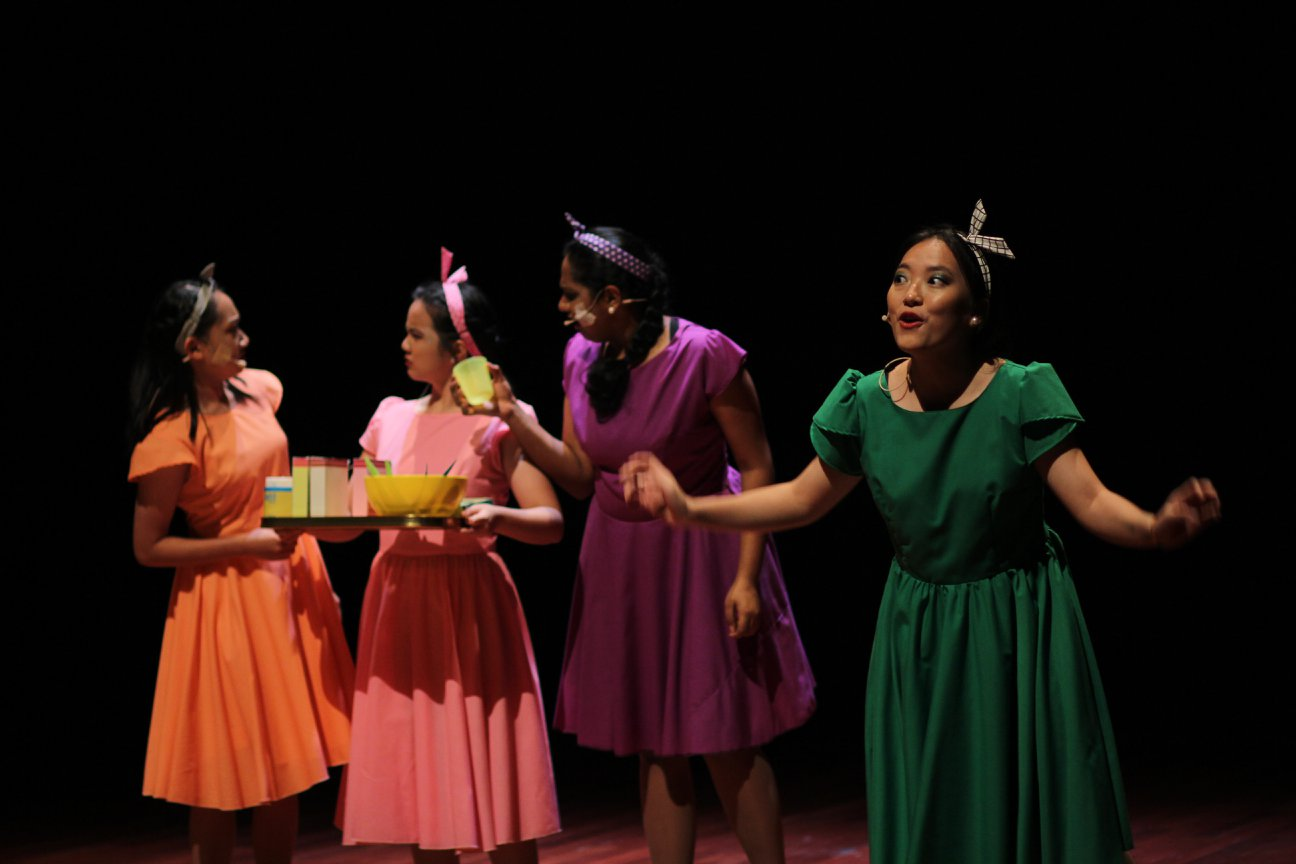 People seem to go to extreme extents to achieve that ‘ideal’ body; from taking pills to depriving themselves of food. How has this impacted our physical and mental health?Picture credit: VJC Photography Society

One of the most striking scenes offered a glimpse into how double standards for men and women have impacted women’s psychological health and sense of self-worth. A voluptuous, married woman was eager to show her affection for her husband through physical touch, yet he was hesitant and did not seem to reciprocate her love — simply because she did not fit his — and society’s — perception of an ‘ideal body’. As she continuously tried to chase after her husband and get him to see that she was more than her appearance, he never failed to jump out of the way and criticising her body for not being what he wanted it to be. It was heartbreaking to watch their game of cat-and-mouse and the audience could not help but watch unblinkingly as the woman, so full of vitality at the beginning of the scene, slowly collapsed unto herself and shrank into a shell of who she was, crippled by self-doubt and insecurity.

The themes presented certainly got everyone thinking: appearances play such a big part in our perception of others that we sometimes fail to recognize their inner beauty — their personalities, their ambitions, or even the way they treat others around them. Those who are more popular across the school population, more often than not, tend to be those who are good-looking and fit into society’s ‘ideal’ body type instead of those who have shining personalities. What does this say about us, as social creatures who should be building one another up instead of tearing them down? How does our behaviour and mindset eventually affect us? 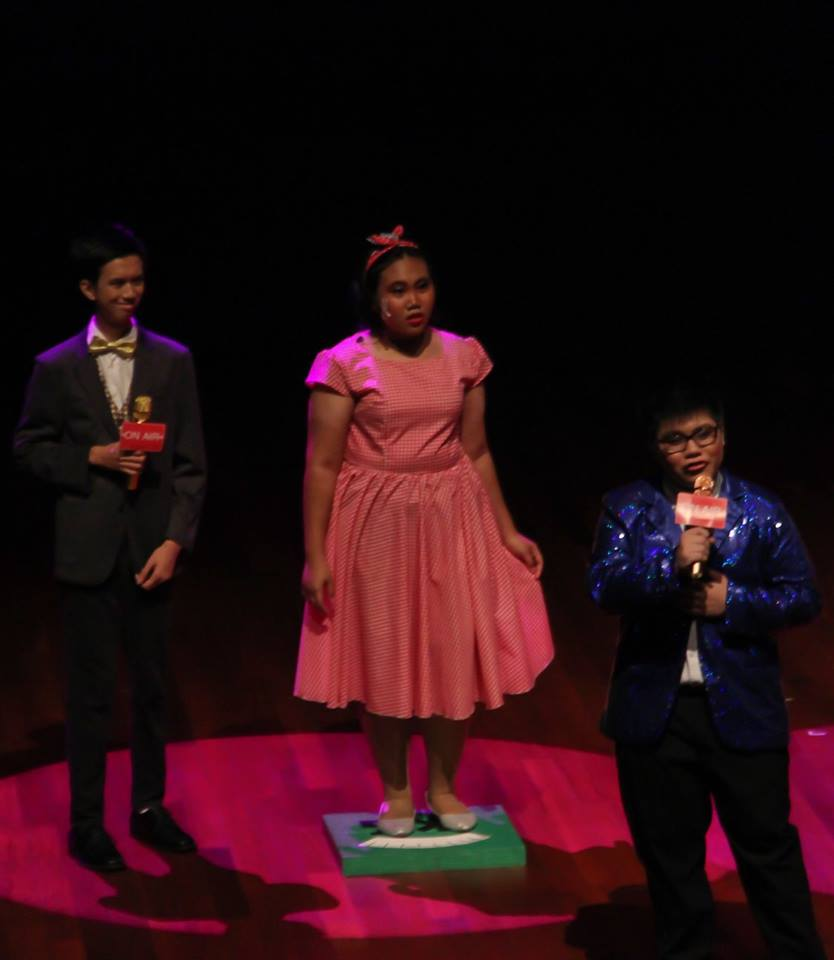 The weighing scale is a tool which we use to measure our body weight, and, indirectly, our sense of worth in society.
Picture credit: VJC Photography Society

Well, the play offered their take on these two questions. In another scene, five women, armed with weighing scales, lined up across the stage, while a presenter commented on their appearances one by one. The women were arranged in order of size; on the left of the stage, the most curvaceous one, commonly deemed least desirable by the media, was a size 14, while on the right of the stage stood the slimmest one out of the five, a size double zero that was most sought after by the media. As if reflecting how the media portrays women and serves to bend our perception of beauty, the presenter continuously put down the largest lady, using her as the ‘before’ situation in a typical before-and-after type of advertisement, then went on to lavish praises on the smallest woman, using her as the ‘after’ situation in the aforementioned situation.

It was interesting to see how the Drama Club members executed the play, with their self-made props (which were certainly well-designed and fitting for each scene, if we do say so ourselves) and the chemistry they had developed through hours of practice, but, more importantly, it was heartening to see this group of young people so unafraid of criticising our society and reflecting its flaws and hard truths. It was equally amazing to see how they fell into their respective roles perfectly, especially since it required them to expose their minds and bodies to the audience. Dishing out the roles and slipping into them as they practiced must have been tough for all of them. Yet pushing through all these hardships clearly paid off at the end of the day; the closing scene earned a rousing applause from an audience touched by the authenticity of the experience. 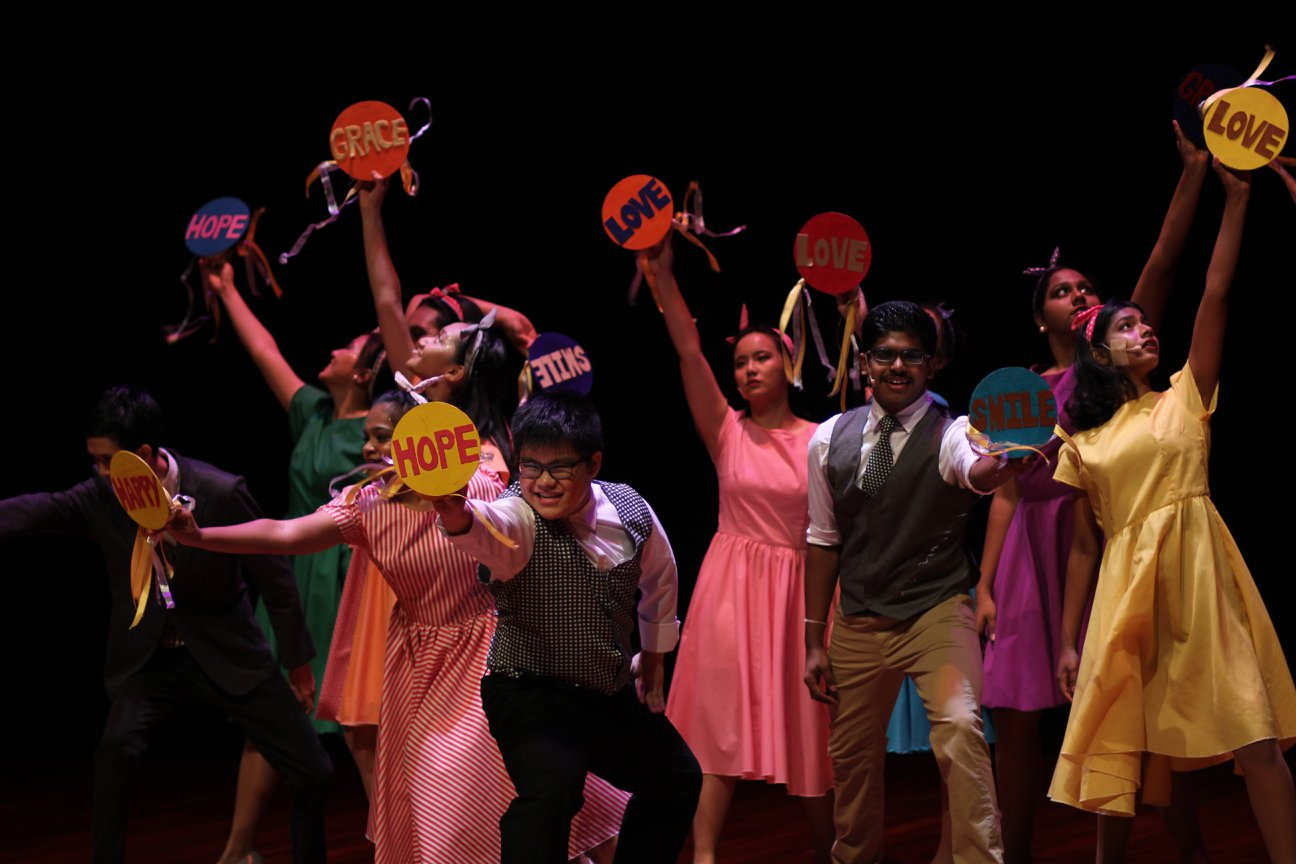 Next up was a short play titled The Silly Little Girl And The Funny Old Tree by Kuo Pau Kun. Impressively, majority of the cast consisted of J1s, with some having been introduced to acting only this year. The whimsically-titled play proved to be filled with heartfelt and fulfilling themes as the audience were led on a whirlwind of emotions through storytelling presented by three little protagonists: an old, wise tree, a bulldozer, and construction workers.

The first scene saw the ‘funny old tree’ taking center-stage. Interestingly enough, its body consisted of various Club members donning bodysuits coloured rich browns and greens; a sea of earthy colours that created the image of one unit that formed the branches, leaves, and stump of the ancient tree. The actors and actresses arranged themselves seamlessly on different blocks, to offer a variation of levels, with their heads held high and arms spread wide.

The entrance of three lively girls, all decked in sweet tartan pinafores, marked the beginning of their interaction with the tree. Despite being located in an inconvenient and remote spot, the tree was visited every day by the girls, who spent time sharing about their worries, their achievements, and their curiosity with it. Over time, they built a unique friendship with the tree, whose experience and age amazed them. Despite the stark contrast between youthful innocence and aged wisdom, the development of a simple friendship between the girls and the tree persisted, and left the audience feeling warm and fulfilled.

One memorable scene that highlighted this friendship was when the girls requested for the tree to teach them how to sing, as they did when the wind blew and swayed their long branches. The tree hummed an age old tune; a song with no lyrics, a melody as sweet as the friendship they shared. Did the tree sway because the wind blew, or did the wind blow because the tree swayed? The tree did not know.  As the tree swayed and the cloth swirled around its body, it revealed that it could not remember its name or anything from its past, except for the tune it hummed. Perhaps age had caught on to it too quickly, and all that was left was a part of its past that held significant meaning to it. The fact that its past was unknown was mysterious to the three girls as it was to the audience, yet they remained by the tree’s side and simply appreciated it for the quirky traits that came with its age. 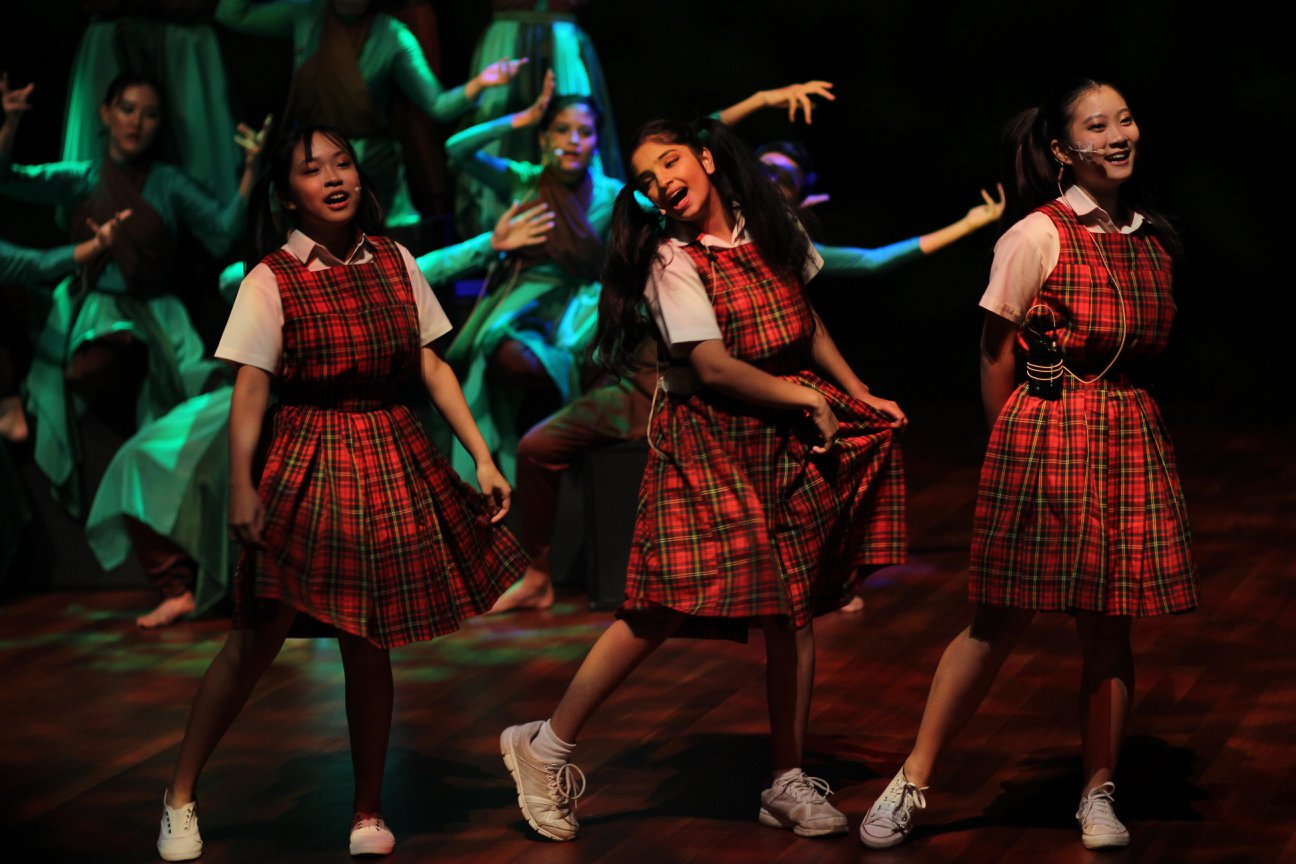 The three girls decked in tartan pinafores as they sang along with the old tree.
Picture credit: VJC Photography Society

As their friendship grew, bulldozers began appearing onstage, first in the background, then in the foreground — a sign of construction work being carried out. For a while, the tree remained untouched, and the girls were only startled momentarily at the loud machinery. Unfortunately, the tree soon caught the attention of land developers — and not in a good way. In order to develop the unused land, a group of construction workers had been tasked to remove the tree. Devastated that their beloved tree was being threatened, the girls made it their mission to protect the tree at all costs.

It was heart-wrenching to see the girls run amok in desperation and fear; after all, they were still so young, yet were now forced to come to terms with the idea of loss. The tree which had taught them about life and offered them shade to rest under had become more than an object to the girls, it had become their closest confidant when they had no one else to turn to for advice or comfort. In a final effort to protect the tree, the girls climbed upon its highest branches and refused to budge until the construction workers promised to spare the tree. Anticipation gripped at the audience’s hearts as the girls pressed for the tree to remain where it was.

In the final scene, the girls’ display of bravery landed them in a mental institution, rendering them helpless against the removal of the tree. While saddening to watch, the ending of the play offered a reminder that as we grow up, the harsh realities of the world are things which we must learn to come to terms with. Rebellion does not get us our way, nor does throwing tantrums continue to sit well with the people whom we are trying to communicate with.

Through the topic of development versus conservation, the Club also presented the theme of subjectivity in working towards the greater good. While the bulldozer operators and land developers were wrong to remove the tree from the perspective of the girls, they did not have any ill-intentions. They were simply interested in developing the area for other people to enjoy. Similarly, the girls may have seemed childish and whiny to the land developers, but they just wanted to protect their friend. There seems to be no completely right or wrong answer because personal values and beliefs vary widely across different groups of people.

As the actors and actresses of both plays re-emerged from the backstage, applause and wolf-whistles erupted from the audience, who recognized both their passion and hard work that were evident in their respective performances. As Sneha, a J1 Drama Club member, put it, “Acting gives you so much space to imagine what you want to do with the story.” With attention to every action and intonation, acting becomes a work of art used to express themes and feelings that are unique to the cast.

Good job to all actors and actresses who shared their artworks with us; it was indeed an honour to be a part of the audience of such a gifted group of performers. The Drama Club has certainly maintained at the top of their game, and interested viewers should definitely look forward to the next Drama Night!